However, whilst the stream may have been small, it was surrounded by boggy ground which was quite unsuitable for cavalry. The advance of the vanguard was thus slowed and slewed right. Seeing the vanguard move to the right, the Bishop of Durham cautiously moved his middle guard to the left to open the opportunity of a co-ordinated attack on the Scottish flanks. However, he was wary of sending his cavalry component forward given the dominant Scottish position.

His caution was vigorously opposed by his deputy, Ralph Bassett, who led his cavalry forward regardless. Bassett's cavalry likewise found their attack defused by the bog but their advance was threatening enough to scare off the Scottish cavalry who fled the field without engaging.

The battle of Stirling bridge, First War of Scottish Independence 1297

However, both English cavalry formations had lost their speed and were unable to penetrate the densely packed schiltrons. Instead they turned upon the Scottish archers who, with no cavalry force to protect them and being outside of the schiltrons, were slaughtered. Their leader, John Stewart, died alongside his men. Having witnessed his cavalry failing to make an impression of the schiltrons, Edward I sounded the recall. 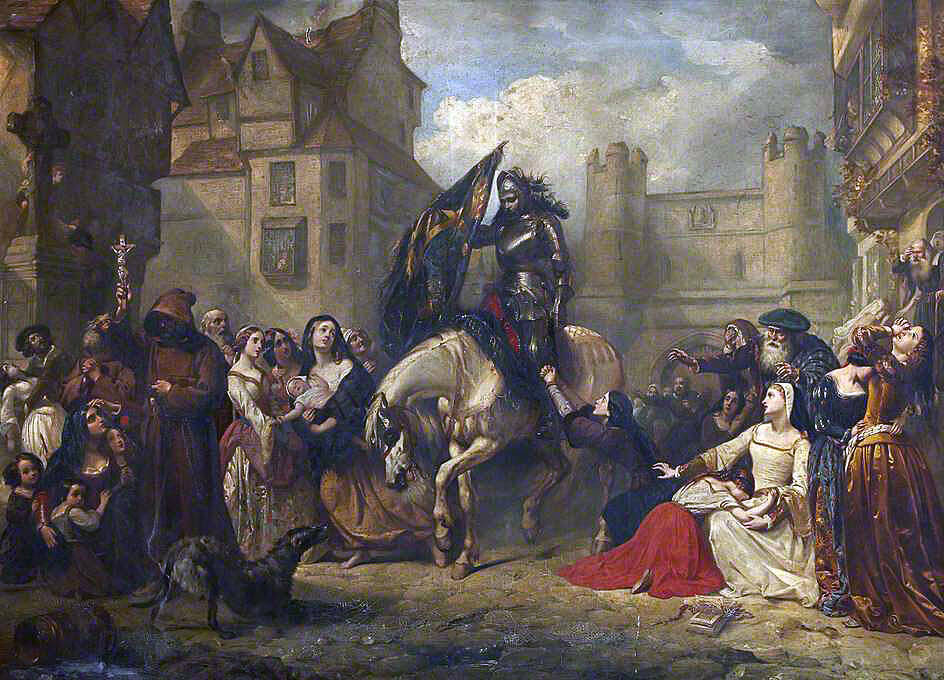 With his Knights recovered to his own lines, he advanced his archers - Crossbowmen from Gascony and Longbowmen from Wales and the Marches - to attack the schiltrons. The massed, static Scottish formations formed the perfect target and heavy casualties were inflicted.

Crucially their ranks were thinned and the wall of spears, that hereto had so effectively kept the English cavalry at bay, started to have gaps. The English cavalry, now reformed, charged against the depleted and now ineffective schiltrons. They smashed into the Scottish formations which broke into rout. The English followed cutting them down with one English Chronicler recording "they fell like blossoms in an orchard when the fruit has ripened".

Casualty numbers are unknown but, for the Scottish forces, are likely to have been extensive. With his army destroyed and his reputation in ruins, Wallace fled the battlefield. He would spend the next seven years mounting a guerrilla war against the English but in reality his power was broken. After a trial at Westminster, he was hung, drawn and quartered in Smithfield. The Battle of Falkirk was significant in that it saw the destruction of the Scottish army in the field and heavy Scottish casualties but, due to the escape of the Scottish nobility, failed to have the long term decisive outcome sought.

However Edward had no intentions of appointing any new King in Scotland and accordingly Robert rebelled in starting a campaign that would see Scottish victory at Bannockburn , the Declaration of Arbroath and English recognition of the independence of Scotland in The precise location of the battle has not been determined and contemporary records are inconclusive suggesting it was simply fought "next to", to the "side of" and on the "plain of" Falkirk. Two main sites have emerged as the most probable locations.


The traditional site of the battle is to the north of the medieval town of Falkirk. This is now the area to the south of the railway station through which Grahams Road now runs. The site has been entirely urbanised and is also cut through by the Forth and Union Canal making an assessment of the terrain difficult. The site does make sense tactically in that it was close to the medieval town and the road to Stirling which also fits with the English advance from the south.

Furthermore recent geophysical surveys have confirmed a mixed terrain including areas on a sand and gravel base which could, theoretically, have supported the softer ground mentioned in the battle accounts. Callendar Wood. The site remains partially undeveloped and the terrain fits perfectly with the established narrative of the battle which has led to it becoming the preferred site in recent academic studies. However, caution must be applied for the landscape has changed significantly since the thirteenth century.

The creation of Callendar Wood, the clearance of numerous fields for grazing purposes, the construction of the Union Canal, the establishment of a reservoir and the building of a housing estate has invariably modified the landscape. Furthermore a map by Pont dated circa suggests the entire site was wooded and, if this was also the case in , a battle certainly wouldn't have been fought here. There is also no evidence of any marshy ground and the underlying clay base would not seem to support it. Finally the location of the site makes little sense in relation to the medieval road to Stirling which is to the north of the battlefield - why then would the English approach from the south?

6 haunting battlefields to explore in Scotland

Hamilton, J Kinross, J The Battlefields of Britain. Lancaster, J. D Falkirk: Battlefield visit notes and observations. Matthews, R Leo Cooper, Barnsley. Windmill Books, London. Pont, T Map of Stirling, Falkirk and Kilsyth. National Library of Scotland. One legend goes that the Norwegians revealed their location to the Scots by yelping in pain after stepping on a field of thistles, and this was the moment responsible for the thistle becoming a national emblem.

Had the Scots decisively lost the battle, history may have been very different - Scotland gained control of the Hebridean isles back from Norwegian hands just two years later. Fought in early September , the Battle of Stirling Bridge witnessed Andrew de Moray and William Wallace triumph in emphatic fashion over the Earl of Surrey-led English, who had been in high spirits following victory at Dunbar.

Stirling was a strategic entrance to the north of Scotland and the royal town of Scone. The Scots lunged forward and cut the fleeing English in two. In the region of 5, English and Welsh soldiers died in the battle. The river must have run red with the blood of the invaders.


Against all the odds, the Scots felled the English at Bannockburn, Stirling. It is widely-regarded as the most important victory in Scottish history. Led by Edward II, the English were heavy favourites who, with around 25, cavalry and infantry, outnumbered the Scots by at least two to one.

But the Scots, fronted by Robert the Bruce, would go on to stage an Auld Enemy upset not equalled in any sphere, militaristic or otherwise, until and Wembley Stadium. At its conclusion, as many as 11, English soldiers lay dead on the battlefield. Two hundred years after Bannockburn, fortunes for the Scots had shifted somewhat.

After the Battle of Towton during the War of the Roses, the Battle of Flodden incurred more casualties than any battle fought on British soil and it involved the largest ever number of combatants in any armed clash between Scotland and England. The English Earl of Surrey ordered his men to block the Scottish retreat in an ambush attack, a tactical masterstroke that brought about the end of an estimated 17, Scottish lives - including that of the king, James IV.

Flodden was more than just the bloodiest battle ever fought; it was one of the most disastrous moments in Scottish history and our greatest military defeat. The Battle of the Shirts was one of the bloodiest. The battle was pitched at Loch Lochy and witnessed utterly disastrous losses on both sides, with just 13 survivors out of an estimated men. It was quite possibly the bloodiest stalemate ever fought in Scottish history. The Battle of Culloden was a defining moment in British history, the result of which ensured the continuance of the Hanoverian throne and the United Kingdom far into the future.